For people who don’t have much money to burn, the following products that I have in my collection of the best mens watches under $100 might be ideal to choose from. Not only they have the bells and whistles that you will need in your daily activities, but they also have styles that can make you stand out from the crowd!

So what are they? And how they can help? Let’s find out below.

NOTE: Prices might vary due to stock availability and promotions 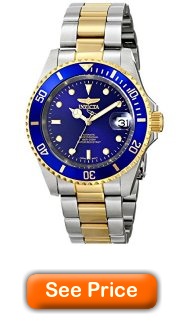 The 8928OB “Pro Diver” almost has so much to offer that it’s ridiculous, especially for the price. This 23k Gold Plated, Stainless Steel dual tone hued Automatic Watch is both feature-laden as well as extremely stylish and dare it be said – sophisticated.

For starters, the automatic powered design means that you’ll never have to replace a battery, which for many guys is probably worth its purchase price alone. Likewise to compliment its crushingly awesome design there is a mineral crystal dial window which protects the timepiece components from being damaged while simultaneously filtering out scratches and the like.

While it’s really a watch that’s made for perhaps casual to more formal presentations, the truth is that it’s also durable and dependable enough to follow you wherever you might go, on land or the open ocean.

Aside from its rather elegant facing, replete with a blue backdrop and stylized hands, there’s a magnified window which presents the date (which is a big upgrade from a lot of other models which feature very tiny, hard to see displays).

All in all, Invicta’s 8929OB is a very classy and expensive-looking watch that’s both classic as well as very elegant in terms of its presentation. 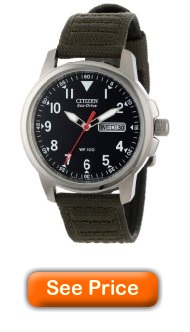 The Citizen Men’s BM8180-03E “Eco-Drive” Canvas Strap Watch is a very different sort of timepiece indeed. While its movement is Japanese Quartz-based and there’s a traditional analog display, clearly the most intriguing part about this watch is the fact that it is in fact solar powered.

Thanks to its built-in “Eco-Drive” technology you never need to worry about having to replace batteries (or even charge it kinetically). In fact, if you place it in an area where it can get its daily dose of sunlight it will probably keep on ticking permanently.

Overall, it remains very accurate in its time-keeping and when you add its other features like water resistance, scratch-resistant mineral dial window and durable brushed stainless steel casing to the mix, it’s not hard to see why lots of guys are crazy about this company and their products.

Really, the only thing that helps to classify this particular watch as a more “sporty” model is its canvas band (which many will likely want to replace with something a bit more “showy”). Again, its main selling point of having built-in solar power cannot be overlooked, especially since it can recharge even indoors.

The BM8180-03E is a very simple, yet sophisticated-looking watch that’s great for multiple applications. 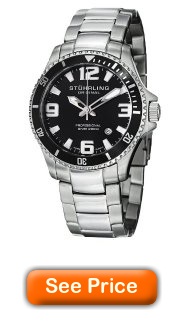 Touting a very classic-looking men’s wristwatch design, the Stuhrling Original Men’s 395.33B11 Aquadiver round dive watch isn’t a model to be taken lightly.

While it does in fact utilize an entirely analog display scheme it is powered by Swiss quartz movement, which is known to keep very good time comparatively. Those who tend to get a bit rough need not worry either, the Krysterna crystal dial window is strong and durable enough to stand up to all the abuse you can throw at it, leaving an unscratched surface in its wake.

Simply put, this particular model might not be quite as bogged down in terms of additional gadgets and so forth, but what it lacks there it makes up for in terms of pure classic style. It’s basically a watch that looks to be much more expensive than it actually is, which, along with its sturdy design and accurate timekeeping, make it easy to replace if lost or stolen as well.

All in all, a very traditional-looking watch that gets the job done with style to spare. 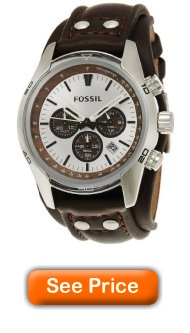 Fossil watches are known for offering uniqueness in terms of both looks and features, but the Men’s CH2565 Cuff Chronograph Tan Leather Watch is something truly special indeed.

First off, its movement is quartz-based inside of a water resistant (up to a depth of 100 meters) stainless steel frame that’s very strong and durable. But what makes it a great pick is its inclusion of second, minute and hour dials in addition to the larger traditional hands on its face.

Likewise, there are little minute touches which add that extra dash of elegance and sophistication, like the wood grain-styled enveloping band on the face as well as the genuine leather band (which also adds to overall comfort as well).

Additionally, there’s a date window which has been positioned slightly off center. However, the main selling point of the Fossil CH2565 is definitely its looks, which hearken back to both traditional watch design values as well as indicate that there are some very forward-thinking concepts at play. It would be great for casual wear on up through situations calling for more formal attire.

It remains a joy to both wear as well as simply look at, again its beige contrasted with stainless steel look being both masculine as well as very stylish.

Casio’s G-Shock Men’s G100-1BV is clearly mostly meant to be a sporty and perhaps practical timepiece for general use. However, as it is armed with both digital as well as analog displays it also remains perfect for situations that one might call more “intense” as well.

The G100-1BV’s movement is quartz-based and everything’s protected via a mineral crystal dial window which affords great durability and resists your more typical scratches, etc. Of course that doesn’t even begin to touch on its other features, which include: water resistance (up to a depth of 200 meters), chronograph, dual time display, luminosity, shock resistance, and stopwatch capabilities.

For the wilderness wanderer who might be wondering if it can easily allow you to check the time in the dark, not to worry, there’s a button on the bottom right corner of the face that’s devoted entirely to “light”.

Moreover, as its name implies, it is indeed shock resistant and furthermore, with no less than two separate means of keeping time you can rest assured that should the worst occur, at least one of them will remain functional.

This particular watch also features a size that’s “just about perfect” for most guys wrists and remains comfortable for longer periods of wear as well.

I know that not everyone will find their favorite among the above listed products. And I know that my best mens watches under $100 don’t necessarily mean yours. But that’s OK I guess.

I still have for you tons of other great collections on my site that you can take a look at and continue browsing until you find what you want. Good luck!