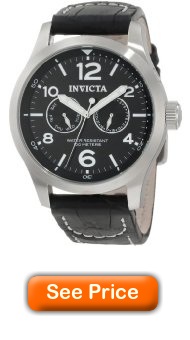 “We have long held firm to the belief that supremely crafted timepieces can be offered for extremely modest sums. It is the founding principle of our flagship and the radical notion that still drives us today. By being true to our convictions, we will continue to turn the balance of power, and deliver true Swiss luxury to anyone who desires it.”

These are the words that greet visitors and motivate team members inside the Invicta Watch Group’s new worldwide headquarters. Emblazoned in stainless steel, it has been the Invicta message since Day One. Invicta 0764 men’s watch bring with it a cool sense of style and a poise that one looks for on formal occasions. “Black” stays color of all the seasons and can grace any apparel of any color.

To simply sum up the look, one would say that it is a logo-ed stainless steel watch with chronograph day/date subdials. Simplicity at its best!

Numerals are bold and subdials help you discover much more than only the time. Analog display has always been in trend and it never fades away. The look of the whole dial is perfectly protected by flame-fusion crystal dial window. With all the above mentioned features, this Invicta timepiece also offers water-resistant to 100 m (330 ft).

Croco-embossed leather band is an ultimate thing for this watch as it breaks the monotony on band and at the same time gives a chic look to the overall watch. Contrast stitching done with a white thread details the band in utmost nice way.

With its most inspired creations yet, Invicta demonstrates it’s technical and design prowess, offering timepieces of style for extreme value. Invicta II Men’s 0764 is a typical style of a conventional watch with some special authentic touches of Invicta. Its black, has subdials, leather band and water resistant. Neither too much nor too less.