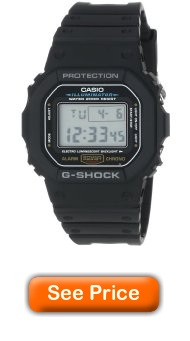 “G-shock” is one of those things that you know Casio for. Presenting Casio DW5600E-1V G-Shock Men’s Watch which would catch all your attention and grab your eyeballs. Casio launched the shock-resistant G-SHOCK watch in the year of 1983.

This product shattered the notion that a watch is a fragile piece of jewellery that needs to be handled with care, and was the result of Casio engineers taking on the challenge of creating the world’s toughest watch. Using a triple-protection design for the parts, module, and case, the G-SHOCK offered a radical new type of watch that was unaffected by strong impacts or shaking.

Being tough is not the only thing that Casio G-Shock DW5600E-1V does. This also features a stopwatch and countdown timer, EL backlight with afterglow, multi-function alarm and water resistance to 200 meters.

Accuracy from Quartz movement married with digital display completes it as a sporty watch. Above that quartz digital movement comes with the accuracy of +/- 15 seconds per month. Quartz movement is concerned apt when it’s accurate to within 0.5-2 seconds per day.

G-shock series is popular since its launch. Its practicality was immediately recognized, and its unique look, which embodied its functionality, became wildly popular, resulting in explosive sales in the early 1990s. The G-SHOCK soon adopted various new sensors, solar-powered radio-controlled technology, and new materials for even better durability.

Black rectangular dial itself sets an anti-monotonous thought as usually round dials are seen in most of the watches.

This Casio watch features a stopwatch and countdown timer, EL backlight with afterglow, multi-function alarm and water resistance to 200 meters. The watch face is protected by mineral window. Mineral crystal is a kind of hardened glass which is much more scratch resistant than acrylic.

Resin is used to make the band. As the G-shock series is pitched on strength, so it needed something really very strong for the band also. Resin is very durable and it doesn’t mark up easily. Admittedly it isn’t as comfortable as rubber, but it lives a much longer life. It is highly chemically resistant and a great tensile strength. With this, it is more expensive as well.

By always employing the latest technology, and continuing to transcend conventional thinking about the watch, the G-SHOCK brand has become Casio’s flagship timepiece product. G-shock has its own fan following. If you haven’t tried it ever then features like countdown timer, EL backlight with afterglow, multi-function alarm can lure you. This is not just a watch and certainly not the one to be worn as a jewellery piece.